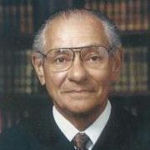 Why Is Edward J. Garcia Influential?

According to Wikipedia, Edward John Garcia is an inactive Senior United States District Judge of the United States District Court for the Eastern District of California. Education and career Garcia was born on November 24, 1928, in Sacramento, California. Garcia was in the United States Army Air Forces in the aftermath of World War II, from 1946 to 1949. He received an Associate of Arts degree from Sacramento City College in 1951 and a Bachelor of Laws from McGeorge School of Law at the University of the Pacific in 1958. He was a deputy district attorney of Sacramento County, California from 1959 to 1972, serving as a supervisor in that office from 1964 to 1969, and chief of that office from 1969 to 1972. He was a judge on the Sacramento Municipal Court, California from 1972 to 1984.

Other Resources About Edward J. Garcia

What Schools Are Affiliated With Edward J. Garcia?

Edward J. Garcia is affiliated with the following schools: