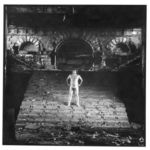 Why Is Edward Kienholz Influential?

According to Wikipedia, Edward Ralph Kienholz was an American installation artist and assemblage sculptor whose work was highly critical of aspects of modern life. From 1972 onwards, he assembled much of his artwork in close collaboration with his artistic partner and fifth wife, Nancy Reddin Kienholz. Throughout much of their career, the work of the Kienholzes was more appreciated in Europe than in their native United States, though American museums have featured their art more prominently since the 1990s.

Other Resources About Edward Kienholz

What Schools Are Affiliated With Edward Kienholz?

Edward Kienholz is affiliated with the following schools: