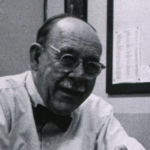 Why Is Edwin Boring Influential?

According to Wikipedia, Edwin Garrigues Boring was an American experimental psychologist, Professor of Psychology at Clark University and at Harvard University, who later became one of the first historians of psychology. A Review of General Psychology survey, published in 2002, ranked Boring as the 93rd most cited psychologist of the 20th century, tied with John Dewey, Amos Tversky, and Wilhelm Wundt.

Other Resources About Edwin Boring

What Schools Are Affiliated With Edwin Boring?

Edwin Boring is affiliated with the following schools: