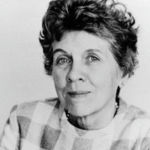 Why Is Eleanor Ross Taylor Influential?

According to Wikipedia, Eleanor Ross Taylor was an American poet who published six collections of verse from 1960 to 2009. Her work received little recognition until 1998, but thereafter received several major poetry prizes. Describing her most recent poetry collection, Kevin Prufer writes, "I cannot imagine the serious reader — poet or not — who could leave Captive Voices unmoved by the work of this supremely gifted poet who skips so nimbly around our sadnesses and fears, never directly addressing them, suggesting, instead, their complex resistance to summary."

Other Resources About Eleanor Ross Taylor

What Schools Are Affiliated With Eleanor Ross Taylor?

Eleanor Ross Taylor is affiliated with the following schools: