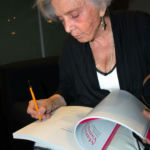 Why Is Elena Poniatowska Influential?

According to Wikipedia, Hélène Elizabeth Louise Amélie Paula Dolores Poniatowska Amor , known professionally as Elena Poniatowska is a French-born Mexican journalist and author, specializing in works on social and political issues focused on those considered to be disenfranchised especially women and the poor. She was born in Paris to upper-class parents, including her mother whose family fled Mexico during the Mexican Revolution. She left France for Mexico when she was ten to escape the Second World War. When she was eighteen and without a university education, she began writing for the newspaper Excélsior, doing interviews and society columns. Despite the lack of opportunity for women from the 1950s to the 1970s, she wrote about social and political issues in newspapers, books in both fiction and nonfiction form. Her best known work is La noche de Tlatelolco about the repression of the 1968 student protests in Mexico City. Due to her left wing views, she has been nicknamed "the Red Princess". She is considered to be "Mexico's grande dame of letters" and is still an active writer.

Other Resources About Elena Poniatowska

What Schools Are Affiliated With Elena Poniatowska?

Elena Poniatowska is affiliated with the following schools:

What Are Elena Poniatowska's Academic Contributions?

Elena Poniatowska has made the following academic contributions: