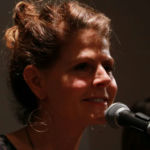 Why Is Eleni Sikelianos Influential?

According to Wikipedia, Eleni Sikélianòs is an American experimental poet with a particular interest in scientific idiom. She currently serves as Professor of Literary arts at Brown University. Early life Sikélianòs is the great-granddaughter of the renowned Greek poet Angelos Sikelianos, a former candidate for the Nobel Prize in Literature, and Eva Palmer-Sikelianos. She was raised in California. She graduated from the Naropa Institute with an M.F.A.

Other Resources About Eleni Sikelianos

What Schools Are Affiliated With Eleni Sikelianos?

Eleni Sikelianos is affiliated with the following schools: