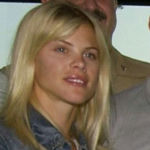 Why Is Elin Nordegren Influential?

According to Wikipedia, Elin Maria Pernilla Nordegren is the Swedish-born ex-wife of professional golfer Tiger Woods. Nordegren has worked as a model and nanny. Early life and education Nordegren was born in Stockholm, Sweden. Her mother, politician Barbro Holmberg, is the former Swedish migration and asylum policy minister as well as the former Governor of Gävleborg County. Her father, Thomas Nordegren, is a radio journalist who has served as a bureau chief in Washington, D.C. She has an elder brother, Axel, and a twin sister Josefin Nordegren. Nordegren and her sister had summer jobs as cashiers in supermarkets to finance their studies. She started modeling in 2000, and appeared on the cover of Cafe Sport magazine in the summer of 2000.

Other Resources About Elin Nordegren

What Schools Are Affiliated With Elin Nordegren?

Elin Nordegren is affiliated with the following schools: