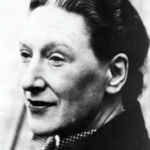 Why Is Elizabeth Bowen Influential?

According to Wikipedia, Elizabeth Bowen CBE was an Irish - British novelist and short story writer notable for her books about the "big house" of Irish landed Protestants as well her fiction about life in wartime London. Life Elizabeth Dorothea Cole Bowen was born on 7 June 1899 at 15 Herbert Place in Dublin and baptised in the nearby St Stephen's Church on Upper Mount Street. Her parents, Henry Charles Cole Bowen and Florence Bowen, later brought her to Bowen's Court at Farahy, near Kildorrery, County Cork, where she spent her summers. When her father became mentally ill in 1907, she and her mother moved to England, eventually settling in Hythe. After her mother died in September 1912 Bowen was brought up by her aunts. She was educated at Downe House School under the headship of Olive Willis. After some time at art school in London she decided that her talent lay in writing. She mixed with the Bloomsbury Group, becoming good friends with Rose Macaulay who helped her seek out a publisher for her first book, a collection of short stories entitled Encounters .

Other Resources About Elizabeth Bowen

What Schools Are Affiliated With Elizabeth Bowen?

Elizabeth Bowen is affiliated with the following schools:

What Are Elizabeth Bowen's Academic Contributions?

Elizabeth Bowen has made the following academic contributions: