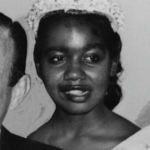 Part of the Little Rock Nine

Why Is Elizabeth Eckford Influential?

According to Wikipedia, Elizabeth Ann Eckford is one of the Little Rock Nine, a group of African-American students who, in 1957, were the first black students ever to attend classes at the previously all-white Little Rock Central High School in Little Rock, Arkansas. The integration came as a result of Brown v. Board of Education. Eckford's public ordeal was captured by press photographers on the morning of September 4, 1957, after she was prevented from entering the school by the Arkansas National Guard. A dramatic snapshot by Will Counts of the Arkansas Democrat showed the young girl being followed and threatened by an angry white mob; this and other photos of the day's startling events were circulated around the US and the world by the press.

Other Resources About Elizabeth Eckford

What Schools Are Affiliated With Elizabeth Eckford?

Elizabeth Eckford is affiliated with the following schools: