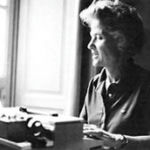 Why Is Elizabeth Eisenstein Influential?

According to Wikipedia, Elizabeth Lewisohn Eisenstein was an American historian of the French Revolution and early 19th-century France. She is well known for her work on the history of early printing, writing on the transition in media between the era of 'manuscript culture' and that of 'print culture', as well as the role of the printing press in effecting broad cultural change in Western civilization.

Other Resources About Elizabeth Eisenstein

What Schools Are Affiliated With Elizabeth Eisenstein?

Elizabeth Eisenstein is affiliated with the following schools: