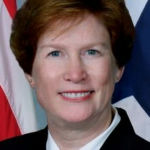 Why Is Elizabeth Hight Influential?

According to Wikipedia, Elizabeth Ann Hight is a retired United States Navy rear admiral who served as the vice director of the Defense Information Systems Agency . She assumed this post in December 2007. In 2008, she was nominated for appointment to the grade of vice admiral and assignment as director, Defense Information Systems Agency; commander, Joint Task Force – Global Network Operations; and deputy commander, U.S. Strategic Command Global Network Operations and Defense, Arlington, Virginia. Her nomination was rejected by the Senate due to a perceived conflict of interest with her husband, retired Air Force Brigadier General Gary Salisbury, who is vice president of business development and sales for Northrop Grumman Corp.'s mission systems sector, defense mission systems division. She retired from the Navy in 2010.

Other Resources About Elizabeth Hight

What Schools Are Affiliated With Elizabeth Hight?

Elizabeth Hight is affiliated with the following schools: