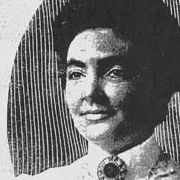 Ella Mundhenke Russell was an American suffragette, businessperson, and politician. She was president of the Everett Suffrage Club. Russell "famously defended women's right to vote before a crowd of 6,500 during a Billy Sunday crusade", and advanced the women's suffrage cause in the city of Everett and the state of Washington. In 1924, she won the nomination as the Republican candidate for the state senate in her district, but was defeated at the election by a Republican "sticker" candidate.