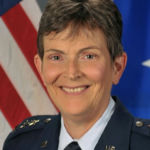 Why Is Ellen M. Pawlikowski Influential?

According to Wikipedia, Ellen Marie Pawlikowski is a retired four-star general of the United States Air Force. She last served as the commander of Air Force Materiel Command at Wright-Patterson Air Force Base from June 8, 2015, to the end of July 2018, managing some 80,000 people and $60 billion in Air Force programs annually. Pawlikowski retired from the Air Force on September 1, 2018, after 40 years of service. She currently serves on the board of directors for Raytheon Technologies, one of the largest aerospace and defense companies in the world, and is a Judge Widney Professor at the University of Southern California's Viterbi School of Engineering.

Other Resources About Ellen M. Pawlikowski

What Schools Are Affiliated With Ellen M. Pawlikowski?

Ellen M. Pawlikowski is affiliated with the following schools: