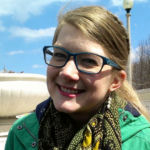 Why Is Emily Graslie Influential?

According to Wikipedia, Emily Graslie is an American science communicator and YouTube educator. She started volunteering at the Philip L. Wright Zoological Museum at the University of Montana in 2011. After appearing in a VlogBrothers video by Hank Green in 2012, she was asked to join the Nerdfighter network. She presented the educational YouTube channel called "The Brain Scoop" until 2021 and also hosted portions of the Big History series featured on the Crash Course YouTube channel. Graslie was employed by the Field Museum as their first-ever Chief Curiosity Correspondent.

Other Resources About Emily Graslie

What Schools Are Affiliated With Emily Graslie?

Emily Graslie is affiliated with the following schools: