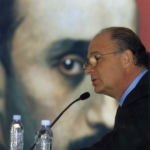 Why Is Enrique Krauze Influential?

According to Wikipedia, Enrique Krauze is a Mexican historian, essayist, editor, and entrepreneur. He has written more than twenty books, some of which are: Mexico: Biography of Power, Redeemers, and El pueblo soy yo . He has also produced more than 500 television programs and documentaries about Mexico’s history. His biographical, historical works, and his political and literary essays, which have reached a broad audience, have made him famous.

Other Resources About Enrique Krauze

What Schools Are Affiliated With Enrique Krauze?

Enrique Krauze is affiliated with the following schools: