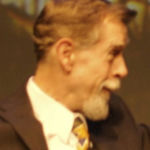 Why Is Eric McLuhan Influential?

According to Wikipedia, Eric McLuhan was a communications theorist and media ecologist, son of Marshall McLuhan. Biography Eric McLuhan was the eldest of Marshall McLuhan's six children. He received his BSc in Communications from Wisconsin State University in 1972 and his M.A. and PhD in English Literature from the University of Dallas in 1980 and 1982. In 2007, he received the Neil Postman Award for Career Achievement in Public Intellectual Activity from the Media Ecology Association. In 2011, the University of St. Michael's College in Toronto, Canada awarded him an L.L.D. of Sacred Letters.

Other Resources About Eric McLuhan

What Schools Are Affiliated With Eric McLuhan?

Eric McLuhan is affiliated with the following schools: