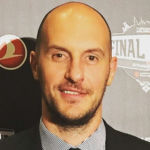 Why Is Ermal Kuqo Influential?

According to Wikipedia, Ermal Kuqo is a retired Albanian-Turkish professional basketball player who played the majority of his career for Efes Pilsen. He is also a basketball executive for the Los Angeles Clippers of the NBA working as Director of International Pro Player Personnel. He is widely accepted as the greatest Albanian basketball player of all times. Kuqo was a part of the Turkish national team from 2004 until 2010, but in the summer of 2010 got granted the wish to play for his birth country Albanian national team.

Other Resources About Ermal Kuqo

What Schools Are Affiliated With Ermal Kuqo?

Ermal Kuqo is affiliated with the following schools: