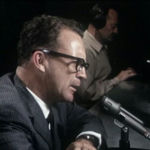 Why Is Ernie Harwell Influential?

According to Wikipedia, William Earnest Harwell was an American sportscaster, known for his long career calling play-by-play of Major League Baseball games. For 55 seasons, 42 of them with the Detroit Tigers, Harwell called the action on radio and/or television. In January 2009, the American Sportscasters Association ranked Harwell 16th on its list of Top 50 Sportscasters of All Time.

Other Resources About Ernie Harwell

What Schools Are Affiliated With Ernie Harwell?

Ernie Harwell is affiliated with the following schools: