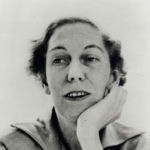 Why Is Eudora Welty Influential?

According to Wikipedia, Eudora Alice Welty was an American short story writer, novelist and photographer, who wrote about the American South. Her novel The Optimist's Daughter won the Pulitzer Prize in 1973. Welty received numerous awards, including the Presidential Medal of Freedom and the Order of the South. She was the first living author to have her works published by the Library of America. Her house in Jackson, Mississippi, has been designated as a National Historic Landmark and is open to the public as a house museum.

Other Resources About Eudora Welty

What Schools Are Affiliated With Eudora Welty?

Eudora Welty is affiliated with the following schools:

What Are Eudora Welty's Academic Contributions?

Eudora Welty has made the following academic contributions: