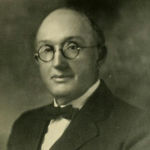 He wrote a book called The Story of Cotton

Why Is Eugene C. Brooks Influential?

According to Wikipedia, Eugene Clyde Brooks was an American educator. He was educated at Trinity College , where he earned an A.B. degree in 1894. He also earned a Litt.D. degree from Davidson College in 1918. Brooks was an educator by trade and spent much of his early professional life working in the North Carolina school system as a teacher, principal, and superintendent. From 1906-1923 he worked as the editor of North Carolina Educator, an education journal of which he was the founder. He was named head of the Department of Education at Trinity College in 1907, where he served until 1919 when he was appointed state superintendent of public instruction by Governor Thomas Walter Bickett. He was elected to the office in the 1920 general election.

Other Resources About Eugene C. Brooks

What Schools Are Affiliated With Eugene C. Brooks?

Eugene C. Brooks is affiliated with the following schools: