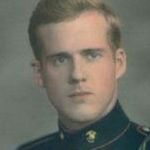 Why Is Eugene Sledge Influential?

According to Wikipedia, Eugene Bondurant Sledge was a United States Marine, university professor, and author. His 1981 memoir With the Old Breed: At Peleliu and Okinawa chronicled his combat experiences during World War II and was used as source material for the Ken Burns PBS documentary The War , as well as the HBO miniseries The Pacific , in which he is portrayed by Joseph Mazzello.

Other Resources About Eugene Sledge

What Schools Are Affiliated With Eugene Sledge?

Eugene Sledge is affiliated with the following schools: