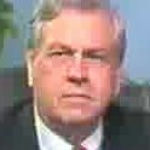 Why Is Eustace Mullins Influential?

According to Wikipedia, Eustace Clarence Mullins Jr. was an American white supremacist, antisemitic conspiracy theorist, propagandist, Holocaust denier, and writer. A disciple of the poet Ezra Pound, his best-known work is The Secrets of The Federal Reserve, in which he alleged that several high-profile bankers had conspired to write the Federal Reserve Act for their own nefarious purposes, and then induced Congress to enact it into law. The Southern Poverty Law Center described him as "a one-man organization of hate".

Other Resources About Eustace Mullins

What Schools Are Affiliated With Eustace Mullins?

Eustace Mullins is affiliated with the following schools: