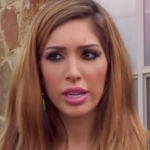 Why Is Farrah Abraham Influential?

According to Wikipedia, Farrah Abraham is an American reality television personality, singer, and writer. Born in Omaha, Nebraska, and raised in Council Bluffs, Iowa, she received public attention after being cast in the reality television series 16 and Pregnant in 2009, which documented the pregnancies and first months of motherhood for several young women. Later that year, she was cast in the spin-off series Teen Mom, and appeared in each of its four seasons until its conclusion in 2012. That August, she released her debut studio album and first memoir, both of which were titled My Teenage Dream Ended. The book made it onto The New York Times bestseller list.

Other Resources About Farrah Abraham

What Schools Are Affiliated With Farrah Abraham?

Farrah Abraham is affiliated with the following schools:

What Are Farrah Abraham's Academic Contributions?

Farrah Abraham has made the following academic contributions: