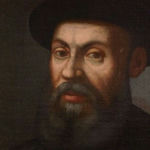 Portuguese explorer in the service of Spain

Why Is Ferdinand Magellan Influential?

According to Wikipedia, Ferdinand Magellan was a Portuguese explorer and a subject of the Hispanic Monarchy from 1518. He is best known for having planned and led the 1519 Spanish expedition to the East Indies across the Pacific Ocean to open a maritime trade route, during which he discovered the interoceanic passage bearing thereafter his name and achieved the first European navigation from the Atlantic to Asia. While on this voyage, Magellan was killed in the Battle of Mactan in 1521 in the present-day Philippines, but some of the expedition's surviving members, in one of the two remaining ships, subsequently completed the first circumnavigation of the Earth when they returned to Spain in 1522.

Other Resources About Ferdinand Magellan