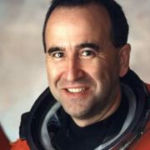 Why Is Fernando Caldeiro Influential?

According to Wikipedia, Fernando "Frank" Caldeiro was an Argentine-born American scientist and NASA astronaut. Early life and education Born June 12, 1958 in Buenos Aires, Argentina, but considered New York City and Merritt Island, Florida, to be his hometowns. Graduated from William Cullen Bryant High School, Long Island City, Queens, New York, in 1976; received an associate degree in applied science in aerospace technology from Farmingdale State College in 1978, a bachelor of science degree in mechanical engineering from the University of Arizona in 1984, and a master of science degree in engineering management from the University of Central Florida in 1995.

Other Resources About Fernando Caldeiro

What Schools Are Affiliated With Fernando Caldeiro?

Fernando Caldeiro is affiliated with the following schools: