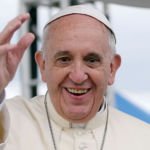 266th pope of the Catholic Church

Why Is Pope Francis Influential?

Other Resources About Pope Francis

What Schools Are Affiliated With Pope Francis?

Pope Francis is affiliated with the following schools: