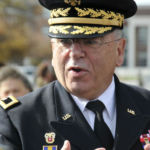 Why Is Francis D. Vavala Influential?

According to Wikipedia, General Francis D. Vavala is a retired Army National Guard officer who served as the Adjutant General of the State of Delaware. He received the promotion in February 1999 after the retirement of Major General George Hastings. In April 2017, Vavala was promoted to general in the Delaware Militia in honor of 50 years of service. He is the first Delaware National Guardsman to achieve four-star rank and one of the very few American service members to have risen from private to four-star general.

Other Resources About Francis D. Vavala

What Schools Are Affiliated With Francis D. Vavala?

Francis D. Vavala is affiliated with the following schools: