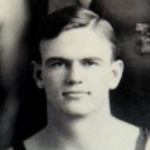 Why Is Francis Heydt Influential?

According to Wikipedia, Francis Elmer Heydt was a competitive swimmer who won three NCAA men's swimming championships, including the 150-yard backstroke event and two 300-yard medley relay championships as a member of the University of Michigan swimming team in 1940 and 1941. He later operated a successful clothing and export business that manufactured camouflage clothing to governments in the United States, Israel, and Libya. He was inducted into the University of Michigan Athletic Hall of Honor in 1988.

Other Resources About Francis Heydt

What Schools Are Affiliated With Francis Heydt?

Francis Heydt is affiliated with the following schools: