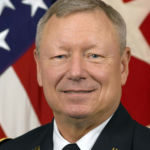 Why Is Frank J. Grass Influential?

According to Wikipedia, Frank J. Grass is a former United States Army general who served as the 27th chief of the National Guard Bureau. Early life and education A native of Arnold, Missouri, Grass was born on May 19, 1951, and graduated from Arnold's Fox High School in 1969. He joined the Missouri Army National Guard in October 1969, and served as an enlisted soldier and noncommissioned officer before graduating from Officer Candidate School in 1981 and receiving his commission as a second lieutenant in the Engineer Corps.

Other Resources About Frank J. Grass

What Schools Are Affiliated With Frank J. Grass?

Frank J. Grass is affiliated with the following schools: