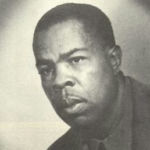 Why Is Frank Marshall Davis Influential?

According to Wikipedia, Frank Marshall Davis was an American journalist, poet, political and labor movement activist, and businessman. Davis began his career writing for African American newspapers in Chicago. He moved to Atlanta, where he became the editor of the paper he turned into the Atlanta Daily World. He later returned to Chicago. During this time, he was outspoken about political and social issues, while also covering topics that ranged from sports to music. His poetry was sponsored by the Works Progress Administration under President Franklin D. Roosevelt's New Deal programs. He also played a role in the South Side Writers Group in Chicago, and is considered among the writers of the Black Chicago Renaissance.

Other Resources About Frank Marshall Davis

What Schools Are Affiliated With Frank Marshall Davis?

Frank Marshall Davis is affiliated with the following schools: