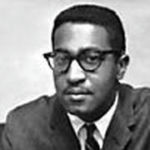 Why Is Franklin McCain Influential?

According to Wikipedia, Franklin Eugene McCain was an American civil rights activist and member of the Greensboro Four. McCain, along with fellow North Carolina A&T State University students Ezell Blair Jr., Joseph McNeil and David Richmond, staged a sit-in protest at the Woolworth lunch counter in Greensboro, North Carolina, on February 1, 1960 after they were refused service due to the color of their skin. Their actions were credited with launching the Greensboro sit-ins, a massive protest across state lines involving mostly students who took a stand against discrimination in restaurants and stores by refusing to leave when service was denied to them. The sit-ins successfully brought about the reversal of Woolworth's policy of racial segregation in their southern stores, and increased national sentiment to the fight of African-Americans in the south.

Other Resources About Franklin McCain

What Schools Are Affiliated With Franklin McCain?

Franklin McCain is affiliated with the following schools: