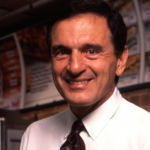 Why Is Fred DeLuca Influential?

According to Wikipedia, Frederick Adrian DeLuca was an American businessman and co-founder of the Subway franchise of sandwich shops. During his tenure, Subway grew into the largest franchise in the world. Early life and education Fred DeLuca was born in Brooklyn, New York, on October 3, 1947 to Italian American parents Carmela and Salvatore DeLuca. At the age of 10, DeLuca moved to Amsterdam, New York, where he and his family became friends with Peter Buck. Once in his teens, he moved with his family to Bridgeport, Connecticut. After succeeding in his business, DeLuca realized his dream to go to college and graduated from the University of Bridgeport.

Other Resources About Fred DeLuca

What Schools Are Affiliated With Fred DeLuca?

Fred DeLuca is affiliated with the following schools: