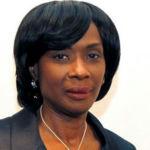 Why Is Frederica Williams Influential?

According to Wikipedia, Frederica M. Williams, MBA, FCIS has served as the president and CEO of Whittier Street Health Center in Boston, Massachusetts since 2002. Family background Frederica Williams was born in Freetown, Sierra Leone. Her family belong to the Creole ethnic group in Sierra Leone. She is the third child of the late Matilda Effeh Williams, an entrepreneur and philanthropist, and Emeric A. Williams, Sr., deputy general manager of the Sierra Leone External Telecommunications .

Other Resources About Frederica Williams

What Schools Are Affiliated With Frederica Williams?

Frederica Williams is affiliated with the following schools: