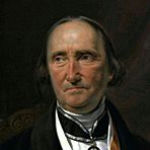 According to Wikipedia, Friedrich Carl von Savigny was a German jurist and historian. Early life and education Savigny was born at Frankfurt am Main, of a family recorded in the history of Lorraine, deriving its name from the castle of Savigny near Charmes in the valley of the Moselle. Left as orphan at the age of 13, Savigny was brought up by a guardian until, in 1795, he entered the University of Marburg, where, though in poor health, he studied under Professors Anton Bauer and Philipp Friedrich Weiss, the former a pioneer in the reform of the German criminal law, the latter distinguished for his knowledge of medieval jurisprudence. After the fashion of German students, Savigny visited several universities, notably Jena, Leipzig and Halle; and returning to Marburg, took his doctorate in 1800. At Marburg he lectured as Privatdozent on criminal law and the Pandects.

What Schools Are Affiliated With Friedrich Carl von Savigny?

Friedrich Carl von Savigny is affiliated with the following schools: