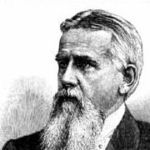 Why Is Friedrich Ratzel Influential?

According to Wikipedia, Friedrich Ratzel was a German geographer and ethnographer, notable for first using the term Lebensraum in the sense that the National Socialists later would. Life Ratzel's father was the head of the household staff of the Grand Duke of Baden. Friedrich attended high school in Karlsruhe for six years before being apprenticed at age 15 to apothecaries. In 1863, he went to Rapperswil on the Lake of Zurich, Switzerland, where he began to study the classics. After a further year as an apothecary at Moers near Krefeld in the Ruhr area , he spent a short time at the high school in Karlsruhe and became a student of zoology at the universities of Heidelberg, Jena and Berlin, finishing in 1868. He studied zoology in 1869, publishing Sein und Werden der organischen Welt on Darwin.

Other Resources About Friedrich Ratzel

What Schools Are Affiliated With Friedrich Ratzel?

Friedrich Ratzel is affiliated with the following schools: