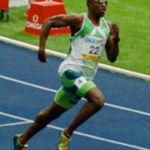 Why Is Gary Kikaya Influential?

According to Wikipedia, Gary Senga Kikaya is a retired sprinter from the Democratic Republic of the Congo. He competed in the 400 m event at the 2004 and 2008 Olympics, but failed to reach the finals. Education Kikaya is the son of Kikaya bin Karubi, a former Information Minister of the Congo, and a former Special Assistant to President Joseph Kabila. At the age of 12 his family moved to Johannesburg, South Africa, where his father served as the Congolese Ambassador to South Africa. Like most Southern African youths, his sporting interests began with rugby and soccer. He attended Queens High School in Johannesburg where he only turned to athletics as a senior in 1999 after watching the World Cup, in Johannesburg, the year before. He achieved the school's highest accolade in the form of a School Honours Blazer. He received a scholarship to study at Rand Afrikaans University , now the University of Johannesburg , was thereafter recruited by the University of Tennessee. Kikaya graduated in sociology at the University of Tennessee in Knoxville, Tennessee.

Other Resources About Gary Kikaya

What Schools Are Affiliated With Gary Kikaya?

Gary Kikaya is affiliated with the following schools: