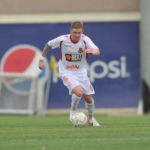 Why Is Gary Muir Influential?

According to Wikipedia, Gary Muir is a Scottish professional footballer, who is currently a player for St Cadoc's Y.C. United States After playing in Scotland during his teenage years, Muir moved to the United States to develop his playing career and was uniquely awarded a 100% scholarship fund. A successful four years in the USA began as Captain of the Louisburg College Hurricanes for two seasons in North Carolina, leading to Captaincy at the University of Hartford in Connecticut.

Other Resources About Gary Muir

What Schools Are Affiliated With Gary Muir?

Gary Muir is affiliated with the following schools: