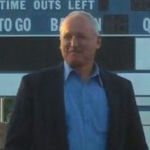 Why Is Geoff Vanderstock Influential?

According to Wikipedia, Geoffrey Peter "Geoff" Vanderstock is an American track and field athlete primarily known for running hurdles. He was once the world record holder in the 400 metres hurdles. His 48.94 was set at the high altitude United States Olympic Trials at Echo Summit, California, on September 11, 1968. He was the first man to run the event under 49 seconds. The hand time took .3 off the previous record held by Rex Cawley. A month later at the 1968 Summer Olympics, he finished 4th in a tight race between 2nd place and 4th place, and given a time of 49.06, while watching David Hemery demolish his world record running 48.12.

Other Resources About Geoff Vanderstock

What Schools Are Affiliated With Geoff Vanderstock?

Geoff Vanderstock is affiliated with the following schools: