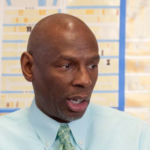 Why Is Geoffrey Canada Influential?

According to Wikipedia, Geoffrey Canada is an American educator, social activist and author. Since 1990, Canada has been president of the Harlem Children's Zone in Harlem, New York, an organization that states its goal is to increase high school and college graduation rates among students in Harlem. This initiative serves a 97-block area of Harlem replete with at-risk children. Canada serves as the chairman of Children's Defense Fund's board of directors. He was a member of the board of directors of The After-School Corporation, a nonprofit organization that aims to expand educational opportunities for all students. Canada's recommendation for educational reform is to start early using wide-ranging strategies and never give up.

Other Resources About Geoffrey Canada

What Schools Are Affiliated With Geoffrey Canada?

Geoffrey Canada is affiliated with the following schools: