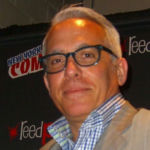 Why Is Geoffrey Zakarian Influential?

According to Wikipedia, Geoffrey Zakarian is an American chef, restaurateur, television personality and author. He is the executive chef of several restaurants in New York City, Atlantic City and Miami. He is featured on several television programs on the Food Network, including Chopped and The Next Iron Chef on which, in 2011, he won the right to join Iron Chef America.

Other Resources About Geoffrey Zakarian

What Schools Are Affiliated With Geoffrey Zakarian?

Geoffrey Zakarian is affiliated with the following schools: