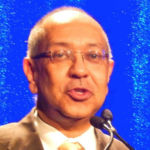 Why Is George C. Wolfe Influential?

According to Wikipedia, George Costello Wolfe is an American playwright and director of theater and film. He won a Tony Award in 1993 for directing Angels in America: Millennium Approaches and another Tony Award in 1996 for his direction of the musical Bring in 'da Noise/Bring in 'da Funk. He served as Artistic Director of The Public Theater from 1993 until 2004.

Other Resources About George C. Wolfe

What Schools Are Affiliated With George C. Wolfe?

George C. Wolfe is affiliated with the following schools: