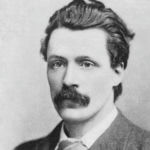 Why Is George Gissing Influential?

According to Wikipedia, George Robert Gissing was an English novelist, who published 23 novels between 1880 and 1903. His best-known works have reappeared in modern editions. They include The Nether World , New Grub Street and The Odd Women .

Other Resources About George Gissing

What Are George Gissing's Academic Contributions?

George Gissing has made the following academic contributions: