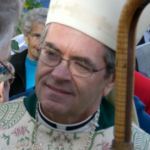 Why Is George Leo Thomas Influential?

According to Wikipedia, George Leo Thomas is an American prelate of the Roman Catholic Church who has served as Bishop of Las Vegas since 2018. Early life and education George Thomas was born in Anaconda, Montana, as the second of the five children of George and Mary Thomas. Raised in Butte, he graduated from Butte Central Catholic High School there in 1968, also when his family moved to Bellevue, Washington. Thomas studied at Carroll College in Helena, from where he obtained his BA degree in literature in 1972. He then went on to study for the priesthood at St. Thomas Seminary in Bothell, earning his M.Div. in 1976. He was ordained to the priesthood by Archbishop Raymond Hunthausen on May 22, 1976.

Other Resources About George Leo Thomas

What Schools Are Affiliated With George Leo Thomas?

George Leo Thomas is affiliated with the following schools: