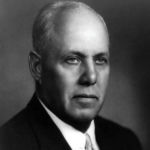 Why Is George Meany Influential?

According to Wikipedia, William George Meany was an American labor union leader for 57 years. He was the key figure in the creation of the AFL-CIO and served as the AFL-CIO's first president, from 1955 to 1979. Meany, the son of a union plumber, became a plumber himself at a young age. He became a full-time union official 12 years later. As an officer of the American Federation of Labor, he represented the AFL on the National War Labor Board during World War II. He served as president of the AFL from 1952 to 1955.

Other Resources About George Meany