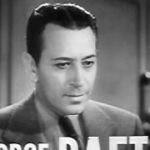 Why Is George Raft Influential?

According to Wikipedia, George Raft was an American film actor and dancer identified with portrayals of gangsters in crime melodramas of the 1930s and 1940s. A stylish leading man in dozens of movies, Raft is remembered for his gangster roles in Quick Millions with Spencer Tracy, Scarface with Paul Muni, Each Dawn I Die with James Cagney, Invisible Stripes with Humphrey Bogart, Billy Wilder's comedy Some Like It Hot with Marilyn Monroe and Jack Lemmon, and as a dancer in Bolero with Carole Lombard and a truck driver in They Drive by Night with Ann Sheridan, Ida Lupino and Bogart.

Other Resources About George Raft