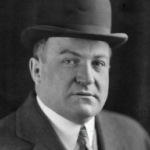 Why Is George Remus Influential?

According to Wikipedia, George Remus was a German-born American lawyer who found success as a bootlegger during the early days of Prohibition. Early life Remus was born in Landsberg, Germany, in 1878 to Frank and Marie Remus. Remus arrived to the United States on June 15, 1882, and briefly lived in Maryland, then Wisconsin and finally moved to Chicago in 1885. At age 14, George supported the family by working at his uncle's pharmacy because Remus' father was unable to work. After graduating from the Chicago College of Pharmacy at 19 years of age, Remus became a certified pharmacist, and bought his first pharmacy at the age of 21.

Other Resources About George Remus

What Schools Are Affiliated With George Remus?

George Remus is affiliated with the following schools: