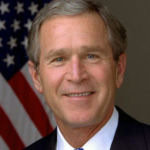 43rd president of the United States

Why Is George W. Bush Influential?

According to Wikipedia, George Walker Bush is an American politician and businessman who served as the 43rd president of the United States from 2001 to 2009. A member of the Bush family and Republican Party, he previously served as the 46th governor of Texas from 1995 to 2000.

Other Resources About George W. Bush

George W. Bush has made the following academic contributions: