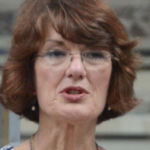 Why Is Geraldine Doogue Influential?

According to Wikipedia, Geraldine Frances Doogue is an Australian journalist and radio and television presenter. Career After graduating from the University of Western Australia with a Bachelor of Arts degree, Doogue intended to train as a schoolteacher, but instead decided to apply for a cadetship at The West Australian newspaper. She later worked for The Australian and spent several years in the United Kingdom as London correspondent for Rupert Murdoch's Australian newspapers. ABC executives were so impressed with Doogue's on-air presence during an interview with the Four Corners program, that she was offered a hosting role on Nationwide. In 1985 she and Richard Morecroft co-hosted The National, the Australian Broadcasting Corporation's short-lived experiment with a nationwide hour-long nightly news service, combining news and current affairs, with Max Walsh and Richard Carleton as chief reporters.

Other Resources About Geraldine Doogue

What Schools Are Affiliated With Geraldine Doogue?

Geraldine Doogue is affiliated with the following schools: