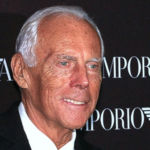 Why Is Giorgio Armani Influential?

According to Wikipedia, Giorgio Armani is an Italian fashion designer. He first gained notoriety working for Cerruti and then for many others, including Allegri, Bagutta and Hilton. He formed his company, Armani, in 1975, which eventually diversified into music, sport and luxury hotels. By 2001 Armani was acclaimed as the most successful designer of Italian origin, and is credited with pioneering red-carpet fashion. In 2010, he opened the Armani Hotel in Burj Khalifa, the world's tallest building. He is also the richest openly LGBT person in the world. According to Bloomberg Billionaires Index, Armani has an estimated net worth of US$9.53 billion, as of 2021.

Other Resources About Giorgio Armani

What Schools Are Affiliated With Giorgio Armani?

Giorgio Armani is affiliated with the following schools: