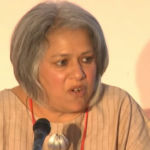 Why Is Gita Sahgal Influential?

According to Wikipedia, Gita Sahgal is an Indian writer, journalist, film director, and women's rights and human rights activist, whose work focusses on the issues of feminism, fundamentalism, and racism. She has been a co-founder and active member of women's organisations. She has also been head of Amnesty International's Gender Unit, and has opposed the oppression of women in particular by religious fundamentalists.

Other Resources About Gita Sahgal

What Schools Are Affiliated With Gita Sahgal?

Gita Sahgal is affiliated with the following schools: